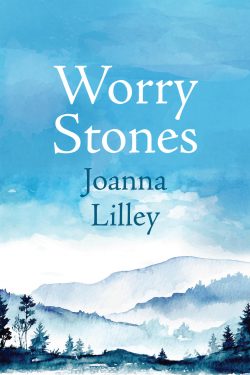 There’s more than a touch of the autobiographical about Joanna Lilley’s first novel, the beautifully poetic Worry Stones. Originally from the UK, Lilley emigrated to Canada in 2006 and now calls Whitehorse home, in much the same way as her main character, Jenny Ross, is torn between her beloved home in Scotland and the austere, ice-filled bays of Baffin Island, where she has been drawn by curiosity, research, and ultimately, love.

Lilley is best known as a poet, and that particular attentiveness to language, to quality of word choice and cadence, is evident throughout her novel. Her two collections of poems, The Fleece Era (Brick Books, 2014; nominated for the Fred Cogswell Award for Excellence in Poetry) and If There Were Roads (Turnstone Press, 2017), in addition to her collection of short stories, The Birthday Books (Radiant Press, 2015), take on the same preoccupations with familial relationships, belonging, and the natural world that return in Worry Stones. These are topic Lilley knows well and speaks eloquently to, and that eloquence makes for a strong, capable first novel.

Linking family and environment in Worry Stones is a rich exploration of the internal geography each of us carries with us, informed as much by the places we’ve called home as the family relationships we’ve shared in those locales. “I am not just from where I was born; / I am from where I’ve lived,” Lilley says in her poetry book If There Were Roads, and there really could be no finer introduction to the focal character of Worry Stones, Jenny Ross. Jenny’s a collector of stones, pegging specific memories to place in the form of the pebbles she picks up in every location her family has lived throughout her childhood. But she’s more nuanced than that as a character: instead of just allowing the landscape to work on her (her childhood landscapes of England and Scotland, and her adult, chosen landscapes of Greenland and Baffin Island), Jenny becomes a carver (a whittler, she calls herself, to dull the import). She writes herself into the places she’s lived through the sticks she collects and carves, and later, as she grows into a firmer sense of who she is, through the soapstone she’s gifted by Inuit carver Kavavaow Ishulutak.

At the same time that her carvings and stones allow Jenny to write herself into the landscape as it is writing itself on her, they’re also a method of anchoring herself in a life that has been deeply impacted by the instability of her artistic, fly-by-night parents. From Brighton to the Scottish borders, and from their beloved heritage bed-and-breakfast to the obscure and remote community of Ben Gallachie, home of the Gallachist cult, Jenny’s parents have been moving and seeking for much of her childhood. Seemingly afraid to settle for the mundane, they eventually estrange themselves from one another and from their three daughters in their search for teachings of ultimate importance — though their daughters have serious doubts that Gallachism is anything more profound than a well-coordinated scam.

As much as Worry Stones is a novel about familial breakdown and the way in which places lost and found have a peculiar resonance within us, it’s also a novel about ambition and the building or ruination of dreams. Where Jenny’s parents struggle to be recognized as successful gallery owners (and she an amateur actor, he a painter), older sisters Sophie and Maddie balance their own ambitions for themselves against their parents’ desires. Where one sister systematically estranges herself from their parents as a means of surviving their need to control, the other is still vulnerable to their power to provide or withhold praise. Jenny locates herself somewhere in the middle, pitching her own desires quietly against those of her parents and hoping above all else to hold her family together until it’s evident that nothing can prevent dissolution. It’s a powerful novel in this regard, the interpersonal friction finely wrought and believable, and the daughters’ struggle for agency against their overbearing parents keenly written. And although Gallachism itself, rendered as a predatory sort of cult, actually comes across as being fairly benign in practice in the novel, what is exquisitely rendered is the cult’s ability to get inside Jenny’s father and create a desire for power in a man who has always felt of very little worth to the world. The world of the cult remains opaque, but we see its machinations at work in Alasdair Ross in a very tangible way.

There are a scant handful of moments when the novel stumbles — because the language is so careful and eloquent throughout, the small troubles are perhaps easier to see against that background of very capable prose. These stumbles include times when the action advances, but circles quickly back in on itself, dead-ending: “She got up from the bed and started going through the pockets of her rucksack. There might be chocolate stashed somewhere. There wasn’t, she knew; she never lost track of her chocolate supplies.” In places, the language is just too easy when held alongside its more detailed, nuanced counterpart elsewhere: “She stopped looking. She was so tired. Perhaps she could get through this evening without a sugar fix to smother what she was feeling. She would lie down, just for a few minutes, and then she would go out looking for food. Proper food. She would be sensible and get a take-away. Indian. Her favourite. Carry-out, in Scottish.” But truly, these are minor quibbles, small areas in which the overall musicality and care of the larger work aren’t fully reflected.

I came to the book, I will openly admit, curious to see how Lilley would address the narrative of the Gallachist cult, but Worry Stones gave me so much more than that. It’s a beautiful novel that captures the importance of the lands in which we ground ourselves, and how damaging our uprooting from those places of identification can be. Lilley illuminates all over again the complexity and friction of family relationships, and ultimately reveals that trying to outrun one’s own dissatisfaction with life is never truly possible.

Jenna Butler is the author of three critically acclaimed books of poetry, Seldom Seen Road, Wells, and Aphelion; an award-winning collection of ecological essays, A Profession of Hope: Farming on the Edge the of Grizzly Trail; a travelogue, Magnetic North: Sea Voyage to Svalbard; and an upcoming book of essays on beekeeping and climate grief, Revery: A Year of Bees. Her research into endangered environments has taken her from America’s Deep South to Ireland’s Ring of Kerry, and from Tenerife to the Arctic Circle, exploring the ways in which we impact the landscapes we call home. Butler is a professor of creative writing and environmental literature at Red Deer College and lives with three resident moose and a den of coyotes on an off-grid organic farm in Alberta’s North Country.