In His Steps: The Life and Times of Wilberforce Cooper, Vancouver’s Skid Road Priest
by Peter J. Cooper 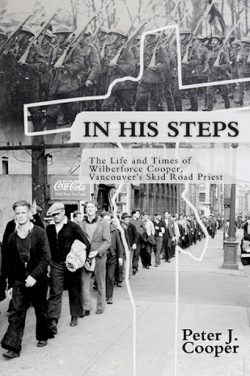 St. James’s Anglican Church presides over Vancouver’s Downtown East Side — presides over but does not loom over. Described as simultaneously Byzantine, Gothic Revival, and Modernist,[1] the church fits into a space between two previously existing buildings. It also fits into a neighbourhood notoriously in need of its mission of hope. Both architecture and mission owe much to the sixth rector of St. James, Rev Canon Wilberforce Cooper, who served the parish and the community from 1921-1952.

When I began attending St. James in 1968, sixteen years and two other priests had come and gone since Fr. Cooper’s departure, but the priest-in-charge was still driven to complain to friends that parishioners kept telling him “how Fr. Cooper would have done it.” An inspiration is a hard act to follow — and difficult to portray in words, especially if he is a family legend. The author, Peter J. Cooper, met his great-uncle only once, but has had access to Fr. Cooper’s letters and journals, and was struck by “his total immersion in his faith such that virtually all aspects of his life he discussed only in these terms,” and impressed by “his unreserved devotion to the affairs and wellbeing of people who were led to his care.” Peter Cooper’s accomplishment, summarized in Lyndon Grove’s introduction, is “to produce what is both a fond family portrait and a record of life on Vancouver’s Downtown Eastside in the first half of the twentieth century.”

The story begins at the beginning, with “Uncle Bill’s” birth in Hull, Yorkshire, in 1881, (coincidentally the birth-year of St. James’s Church on the waterfront of the future city of Vancouver), continuing through childhood and schooldays to higher education at Oxford and Ely College, and a growing attachment to the Oxford Movement and the Anglo-Catholic tradition of High Church Anglicanism. Rather than struggling with any explanation I might attempt, readers can more helpfully and enjoyably visit the website https://stjames.bc.ca/ where each picture really is worth a thousand words. It was true in Fr. Cooper’s time, and remains true in the 21st century, that people who come for the transcendent beauty of the liturgy are inevitably drawn into the wider truths celebrated by that liturgy.

Fr. Cooper’s career began in the inner city, at the Wellington College Mission in south London. His sister Phyllis was working at the Ladies House at the Mission, the beginning of a lifelong collaboration. Their lives, like everyone else’s, were interrupted by the First World War. Fr. Cooper served as chaplain in Greece and Turkey, later in France and Belgium. He remembered a field hospital: “They came and went, they recovered and they died. One did, I hope, one’s best.” All the while he struggled with concepts such as “the just war” and “love thy enemy,” asking why he was there: “the answer always was ‘To gather up fragments’ — physical fragments for burial, moral and spiritual fragments for some real hope of newness of life.”

The Anglican Church of Canada has always maintained family ties with its parent Church of England, until 1955 calling itself the Church of England in Canada, and it still occasionally recruits British priests, especially for High Church parishes. So it was that after the war, Fr. Cooper and Phyllis found themselves in Cariboo country for two years, first at Quesnel, then at Prince George. In Vancouver Fr. Robert Harker, incumbent at St. James, was searching for someone to continue his work of rescuing the parish from bankruptcy while maintaining its spiritual and community missions. In Fr. Cooper he saw the ideal candidate, holiness associated with hard-headed business sense.

The post-war decade was not a good era for the Downtown East Side, not that any era ever has been. The flu epidemic flourished among a population of young, single, and often immigrant men holding low-income jobs and living in crowded housing. Beyond the much-publicised gambling dens and red light district, Fr. Cooper perceived the societal challenges related to underemployment, public health, and ethnicity. His training at the Wellington College Mission, followed by the battlefields, had fitted him for this parish, whose location he “always found entirely suitable.”

He was not entirely alone. Looking on from a different perspective, Peter Cooper may not have realized the extent to which his great-uncle’s flock extended beyond the mean streets of his physical parish. They came, and come, from all areas of greater Vancouver, drawn by a particular form of churchmanship and fulfillment of spiritual yearnings. Fr. Cooper offered them his leadership, charisma, and commitment. In return, they offered affection as well as prayerful and practical support and commitment. Somewhere en route to this “entirely suitable” location, class and economic barriers become less important, or something that could be built upon. From wealthy entrepreneur Charles Woodward to the widow with her mite, they were Cooper’s sheep and allies.

However, the parishioners had homes to go to and other jobs to attend to. Fr. Cooper needed full-time priestly help. Besides the sheer burden of church and community, he had to contend with uncertain health, including a recurrence of wartime malaria. He dreamed of a clergy team inspired by the “Community of the Resurrection” at Mirfield, Yorkshire. Known for its Anglo-catholic tradition, its international outreach missions, pastoral teaching, and training of ordinands for the priesthood, Mirfield was Cooper’s starting point in his search for candidates. His lively journal shows how he sighted his prey, tested their suitability and compatibility, and landed them in his net. During 1923, Fr. Harold Whitehead and Fr. Bruce Reddish joined Fr. Cooper and Phyllis at St. James.

Astonishing now to consider, building projects flourished under Fr. Cooper, with benevolent encouragement from Fr. Harker in England. During the 1920s, St. James constructed a parish hall and a clergy house, on either side of the church. Then, in 1928, Harker suggested that the church itself be replaced. The little building, which had stood since the original perished in the fire of 1886, had never been intended to be permanent. And so they built a new church — during the Depression — without neglecting the needs of the community. Fr Cooper called on British connections, including Adrian Gilbert Scott from the famed family of architects. Harker contributed from his specially designated personal funds, and the people of St. James met his challenges. The youth group and players raised funds with help from Shakespeare. Everyone bought printed “shares” for very small sums and kept them forever as proof of their part in the building. And it opened just in time for the Second World War.

Peter Cooper makes effective use of public documents, newspapers, and archives to describe wartime on the Downtown East Side: the labour unrest, the internment of Japanese Canadians parishioners and neighbours, and the cooperation with other Christian leaders to approach local government to advocate for “society’s discards.” At the same time Fr. Cooper and his associates dealt with the everyday matters of life and death that occur in any parish.

Cooper retired in 1952. His successor, Rev. [later Bishop] David Somerville remarked “it was just as if God had left and was going to England.” The book recounts a “retirement,” which of course involved working as long as he could, in whatever parish needed him, even from a wheelchair, until near the time of his death in 1971.

The concluding chapter muses on temperament, theology, relationships, and married clergy vs, priests living and working together in community. Fr. Cooper felt his sort of priesthood and ministry worked better without the addition of family ties. But now most Anglican priests have partners, and Clergy House has recently been renovated; or, as one of the clergy puts it “reformed” for the needs of a present and future ministry. The author wonders whether his great-uncle might be a saint. The answer seems to be a definite maybe.

Peter Cooper took his book’s title, In His Steps, from “a story Uncle Bill told of his chaplaincy days concerning a soldier who had made a cross for the Battalion Chapel in early 1919. He carved the letters “IHS” on it and when Uncle Bill asked him if he knew what this meant, he responded “In His Steps.” The author explains that IHS is a Christogram containing the First three capitals of the Latinized Greek name for Jesus; but for him, the soldier’s suggestion encapsulates “the whole of my great-uncle’s life.” In His Steps is also the title of a popular religious novel by American Congregationalist minister Charles Monroe Sheldon, first published in 1896. Fr. Cooper would certainly have known the book, and would not have been unsympathetic to Sheldon’s Social Gospel movement.

I wish Fr. Cooper’s direct quotations were not printed in a small quasi-script font, which I find difficult to read. Another quibble is not the author’s fault. Lyndon Grove’s casting of his foreword as a walk along Cordova Street “with the memory of Father Cooper” is a happy one, but he needs to retrace his steps: St. Luke’s and Clergy House remain two very separate buildings, with different histories.

That said, I am enormously grateful to Peter Cooper for putting the Father Cooper of Vancouver legend into the context of Uncle Bill’s human lifetime. Only he could have done this.

Phyllis Parham Reeve has written about local and personal history in her three solo books and in contributions to journals and multi-author publications. One of her books is Every Good Gift; A History of St. James’, Vancouver 1881-1981 (Vancouver: St. James’ Church, 1981). She also contributed the foreword to Charlotte Cameron’s play, October Ferries to Gabriola (Fictive Press, 2017). She is a contributing editor of the Dorchester Review and her writing appears occasionally in Amphora, the journal of the Alcuin Society. A retired librarian and bookseller and co-founder of the bookstore at Page’s Resort & Marina, she lives on Gabriola Island, where she continues to interfere in the cultural life of her community. More details than necessary may be found on her website: https://sites.google.com/site/phyllisreeve/