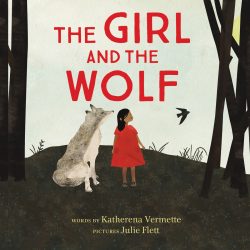 What inspired this empathetic tale? Katherena Vermette, a Métis writer from Winnipeg, says in her author’s note that this “completely made-up story” was influenced by traditional ones.

The Girl and the Wolf is the work of an innate storyteller who has chosen her words — not too many and not too few — perfectly. There is a rhythmic quality in her use of repetition, for example, in the phrase, “I don’t know,” and the response, “Yes, you do.” Dialogue is sparse yet totally apt, lending depth to the story.

It is berry-picking time, and a little girl wearing a bright red dress runs — with joy in every step of her moccasin-clad feet. Her mother’s warning not to stray too far before dark floats over the girl’s head like the butterfly just ahead of her.

When she stops running she no longer sees her mother and cannot remember the way back to her. The trees loom thick and black; she is scared and hungry.

The wolf came up close and sniffed her
His wolf breath was hot and stank of meat.

Will this wolf use his wiles to trick the child? As happened to Little Red Riding Hood?

No, this is not a story about a wolf from old European fairy tales. This is a compassionate, helpful, wolf. He tells her:

Take a deep breath.
Close your eyes, then look. What do you see?

And so the child, too young to hunt, discovers berries to eat and safe water to drink. She finds her way home by recognising trees close to her camp. The wolf has given her strength, a power she did not know she possessed, the ability to rely on herself. Her happiness restored, the girl runs back to her mother, a happy reunion.

The wolf is no longer beside her. He has disappeared, his work done.

That evening, the girl wraps a special gift of tobacco, one of four sacred medicines — Vermette explains in her Author’s note – as a thank you for the help she was given.

The illustrations by Julie Flett, a Cree-Métis artist based in Vancouver, are outstanding. Her textured images are perfectly in tune with the story, both supporting and enhancing the words.

The end papers — a delicate shade of palest blue, with a motif of white butterflies in the upper and lower corners — provide serenity and contrast to the darkness that falls rapidly as the tale unfolds. The girl with her flowing black hair and scarlet dress illuminates each page.

One of the most striking illustrations is when the wolf first appears, white teeth gleaming, eyes glinting. Flett has created a brilliant image of the girl’s apprehension, as she holds herself still. Yet moments later, the wolf appears as a caring companion watching over her; the artist’s image now exudes gentleness and compassion.

This is an intrinsically Canadian picture book that is sure to resonate with children, both in this country and beyond.

Playwright/writer, Irene N. Watts, was born in Berlin, educated in England and Wales, and has made her home in Canada since 1968. Her trilogy: Good-bye Marianne, Remember Me, and Finding Sophie (Tundra Books, 1998-2002), was inspired by her own journey out of Nazi Germany byKindertransport. She writes in different genres: picture and chapter books, plays, and historical novels. Her most recent work is Seeking Refuge, a graphic novel illustrated by Kathryn E. Shoemaker (Tradewind Books, 2016). Her favourite awards include the Geoffrey Bilson Award for Historical Fiction, the Western Canadian Jewish Book Award, and B.C.’s Chocolate Lily Award. She is a life member of Playwrights Guild of Canada.