The Birds of Vancouver Island’s West Coast
by Adrian Dorst 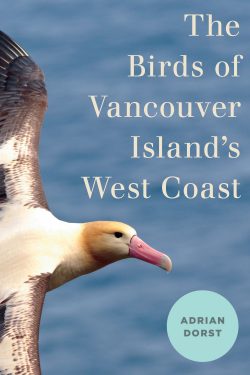 With a cover adorned by a stunning Short-tailed Albatross — a deep-sea wanderer and visitor to British Columbia’s rich coastal waters — The Birds of Vancouver Island’s West Coast is immediately captivating.

The author, Adrian Dorst of Tofino, has been a devotee of birds and nature for more than sixty years, as well as wilderness photographer, environmentalist, and author of Meares Island: Protecting a Natural Paradise (Friends of Clayoquot Sound, 1985, with George Paul), the bestselling book Clayoquot on the Wild Side (Raincoast Books, 1990, with Cameron Young), Reflections at Sandhill Creek: Meditations on the Wild West Coast (Harbour, 2009), and several other books.

In The Birds of Vancouver Island’s West Coast, Dorst makes his profoundly hard-earned knowledge gleaned over decades instantly available to anyone inclined to learn more. Accessible to casual birdwatchers on a weekend excursion to Tofino, and yet at 560 pages loaded with material of interest to the most hardcore birder, this book has much to offer.

Already an essential reference for the avian species inhabiting Vancouver Island’s west coast region, Dorst’s magnum opus provides detailed accounts of all regular and accidental species recorded there — 360 in total — in addition to hypothetical species. Each entry provides an introduction, description of range, and fundamental life history characteristics in addition to first- and second-hand observations and anecdotes.

Interspersed among the detailed descriptions of plumage, migratory movements, timing, and number of occurrences in the west coast Vancouver Island region are nuanced descriptions of species’ behaviour and life histories.

Particularly revealing is Dorst’s description of Bald Eagles. These highly predatory rulers of the skies do flyovers “just to test” flocks of gulls resting on the shores, with any slow or injured gull immediately targeted. Mallards, Dorst notes, usually get a free pass due to their ability to fly vertically from water; but other ducks, such as Green-winged Teals, receive no reprieve.

Dorst describes eagles that work strategically in pairs to exhaust diving ducks; that pluck geese still gaining altitude from the skies; that thieve hunter-felled ducks, mid-air; that gorge on the rotted carcasses of seals and sea lion carcasses that wash up on Vancouver Island’s shores – all this tells of Dorst’s life spent watching the watcher of the woods.

And be sure not to mistake the high level of detail and organization, which is often the way with birders, for dryness and an overly focused narrative. Birders who spend years, decades, or entire lifetimes in the study of birds — the living descendants of dinosaurs and one of the most threatened taxa on the planet – make a worthy contribution. That Dorst has provided a treasure-trove of information for all birders, present and future, is a significant achievement for which I am grateful.

As with many writers who spend time in the company of birds, Dorst is careful to highlight the legacy of more than a century of rampant habitat degradation and destruction, with particular emphasis on commercial fisheries and clear-cut logging. These changes, Dorst explains, can be found in the diminished and otherwise altered populations of many birds on Vancouver Island’s west coast.

Not a real criticism and more of a lament, however, is that apart from the gorgeous cover, the book’s photos are reproduced in black and white. Perhaps, though, this is Dorst’s way of leaving you wanting more, gently persuading you to go outdoors, binoculars in hand!

A coastal ecologist and conservation scientist from Vancouver Island, Dr. Caroline Fox is author of At Sea with the Marine Birds of the Raincoast (Rocky Mountain Books, 2016), which won the Lane Anderson Award for Science Writing and was shortlisted for the Basil Stuart-Stubbs Prize for outstanding scholarly book on British Columbia, both in 2017. Caroline completed her Ph.D. in the Biology Department at the University of Victoria in 2013 and held postdoctoral fellowships with the Raincoast Conservation Foundation and the University of Victoria (2013-15), and then a Killam Postdoctoral Fellowship in the Department of Oceanography at Dalhousie University (2015-17). She teaches summer courses at the Bamfield Marine Sciences Centre. Follow her work at http://www.carolinefox.ca/home