Dale Leckie’s Rocks, Ridges, and Rivers was a 2018 finalist in the High Plains Book Awards and received an honourable mention in the Best Guidebook (Popular Category) awards from the Geoscience Information Society. Yoho National Park, on the western slope of the Rocky Mountains in British Columbia, figures prominently. Reviewer Syd Cannings welcomes Leckie’s roadside tour guide for his future trips through the Rocky Mountains. – Ed. 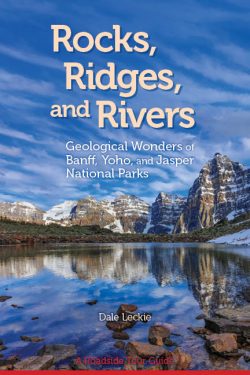 Most of us have made a pilgrimage to Canada’s Rocky Mountain national parks or have it on one of our lists of things to do. On that trip, if you’re a curious sort of person, questions might keep popping into your head….

How did these mountains get here and why are they all lined up like that?

What is the Burgess Shale (in B.C.’s Yoho Park) anyway, and why is everyone talking about it?

Why is the water in Miette Hot Springs so hot?

And the classic: why is Lake Louise such a glorious aquamarine colour?

If you’re that sort of curious person, here is a roadside guide to geology in the broad sense, covering mountain building, paleontology, erosion, glaciation, and every other aspect of the field. We are in good hands with Dale Leckie, an award-winning geologist who has made the Rockies his backyard for decades.

The first thing I noticed about this book was that it was a pleasure to look at and leaf through. A welcome but unusual feature (in a guide such as this) is the inclusion of quite a few stunning paintings by Heather Pant. Although these aren’t used in illustrating geological formations, they again serve to make the book a pleasure to leaf through.

The book begins by looking at the big picture, putting the geology of the Rocky Mountains in the context of geological time, and in the regional context of the formation of all the mountain belts of western North America.

The author tells the story of the assembling of the various geological terranes that make up the western edge of the continent, and how their collisions created the high ground from which today’s mountains have been sculpted.

This complex story is accompanied by colour diagrams, maps, and tables that include the stratigraphy of the Rockies through geological time, a cross-section of the Rockies from west to east, and the tectonic evolution of western North America.

The bulk of the book is organized as a road trip through the Rockies, with fifty stops of interest (or Geological Experiences, as they are called by the author), from Mount Yamnuska (east of Canmore) north to Miette Hot Springs in Jasper National Park.

Some stops are pullouts along the highway; others involve a short walk on a park trail. Each stop is illustrated with one or more colour photographs, maps, and geological diagrams. Panoramic photographs are marked with the names of geological formations and faults. That way we know exactly what we’re looking at.

We learn that at 51 degrees Celsius, the Miette Hot Springs are the hottest springs in the Canadian Rockies. Ground water in this area descends to about 1600 m below the ground until it meets with the Hot Springs Fault, and is heated about 1 degree for every 33 metres of its descent.

We learn why the mountains of the Main Ranges are castellated with more horizontal layers (think of Castle Mountain in Banff National Park) than the tilted, skyward-pointing peaks of the Front Ranges (think of Mount Rundle, east of Banff).

We learn how rivers flowing down hanging valleys plummet over waterfalls early in their history, but ultimately may create deep canyons.

Sidebars highlight sites that are “Interesting and Nearby” or go into depth on geological subjects such as the Devonian Period in Alberta, or the geography of glaciers, or how erosion created the Rockies we know today.

If you don’t know what a normal fault or a syncline is–or if slatey cleavage, slickensides, or knickpoints cause your eyebrows to go up–Leckie provides a glossary.

I count myself in the “interested naturalist” group and, even though I’ve written about geology for the layperson, I still find that I must go back again and again to the geological time scale to remind myself exactly when the Middle Ordovician (for example) began and ended.

Sometimes I wish we were provided with the approximate age in millions of years rather than a name, but that may just be laziness on my part.

As an aging reader, I found the typeface a wee bit small, especially in the sidebars and captions. But I don’t need a magnifying glass to see this is not a guide to all the Canadian Rockies, or even all the parks of the southern Canadian Rockies.

Conspicuously absent is Kootenay National Park, which is adjacent to Banff and Yoho.  Waterton Lakes National Park, separated some distance to the south, is also excluded. As a former park naturalist in Mount Robson Provincial Park (which adjoins Jasper), I was hoping to see its spectacular geology featured, if only in a sidebar.

But clearly this is a book that would be a welcome passenger on my trips through the Rocky Mountains. The design is a major feature of the book, and I was happy to see that the designer, Sergio Gaytán, is acknowledged with a full page and a photograph at the back of the book. As someone who has written similar books, I know the importance of a great designer, and of a good author-designer collaboration.

Born and raised in the Okanagan Valley in a family of amateur naturalists, Syd Cannings began to study the natural world seriously at UBC, where he received Bachelor’s and Master’s degrees in Zoology. After graduation, he became the curator of the UBC insect collection from 1980 to 1991 and began a series of summer insect surveys to the Yukon. In 1991, he moved to Victoria to become the zoologist for the B.C. Conservation Data Centre, and for the next decade he travelled the province, searching out hotspots of biological diversity and rarity. In 2003, the call of the Yukon pulled him north again, and he has worked as a Species at Risk Biologist for the Canadian Wildlife Service in Whitehorse ever since. With his brother Richard, he has written a number of books on B.C.’s natural history, including British Columbia: A Natural History (1996; new editions 2004 and 2015), Geology of British Columbia (1999), The World of Fresh Water (2008), and The New B.C. Roadside Naturalist (2014), all published by Greystone Books. British Columbia: A Natural History won the Bill Duthie Booksellers Choice Award for best book published in B.C., the Canadian Science Writers’ Book Award, and the Lieutenant-Governor’s Silver Medal for best book on the history of B.C.