Born in Gander, Newfoundland, George Mercer worked for 35 years as a park warden, starting in 1979 at Newfoundland’s Terra Nova National Park and ending in 2012 as monitoring ecologist at the Gulf Islands National Park Reserve.

In between, he worked at Cape Breton Island, Fundy, Wood Buffalo, and Jasper national parks. He has now turned that experience into fiction in the form of a series of Canadian Park Warden mysteries, all with an environmental and conservationist message.

“I’ve worked on everything from reintroducing American marten to Terra Nova Park, to peregrine falcons in Fundy, to woodland caribou in Jasper,” Mercer told Victoria News (July 26, 2017). “I look at small places like the Gulf Islands as a beachhead for conservation. It provides a land base and marine area where you can get the message out about the importance of conservation and living on the planet with a gentler hand.” — Ed. 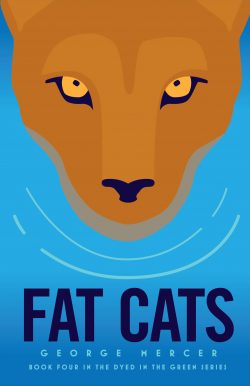 In the last few decades a spate of books have lamented the deterioration of our national and provincial parks, notable among them Switchbacks by Sid Marty (McClelland & Stewart, 1999), who heralded this crisis in our parks, and more recently Dale Portman’s The Green Horse (Rocky Mountain Books, 2017). In the background is a longer tradition of overtly conservationist writing in Canada, for example Roderick Haig-Brown’s The Living Land (Macmillan, 1961). Conservation, Haig-Brown famously wrote, “is as much an act of faith as an intellectual exercise.”

Rare are the writers who weave together an obvious concern for the parks and conservation in a national and grand manner. One such is George Mercer. Fat Cats is the fourth novel in his “Dyed in the Green Series.” His previous Park Warden mysteries — Dyed in the Green (2015), Wood Buffalo (2016), and Jasper Wild (2017) — are set in Cape Breton Highlands, Wood Buffalo, and Jasper national parks.

The previous novels have clarified, in incisive personal detail, the dilemmas park wardens confront across Canada when engaging with the conservation-preservation- development tension. They face crude developers, poachers, hunters, and a dated notion that nature is an expendable commodity to exploit and destroy for profit or senseless amusements and trivial diversions. Mercer uses the sheer beauty and natural bounty of Sidney Island and the Gulf Islands National Park Reserve both as the site and metaphor for some of the inevitable dilemmas that are raised between parks, environment, wild animals, human habitation. and the difficulty of satisfying the needs of each and all in some sort of tenuous cooperative venture.

The title, Fat Cats, is a teaser that veils the more ominous situation that park warden, John Haffcut, fresh from clashes in Jasper National Park, must deal with. Is the fat cat the cougar that has made its way to Sidney Island and is killing families of deer, or is there more to this generously polished tale? Who is the real predator? Who is the real fat cat?

Mercer draws the reader into this unfolding drama, the perennial motifs and main characters of which are very much before us these days. The tale unfolds in a fast moving plot featuring a range of main characters: a cougar mercenary versus a cougar tracker, a park superintendent, park warden, local First Nations, politicians, wealthy landowners, park bureaucrats and administrators, an ex-military man, a widowed beauty, and tensions between park, private, and Indigenous ownership. Issues soon divide close-knit families and partners.

Events on Sidney Island are also a portal into larger national tensions and environmental themes. Fallow deer are taking over Sidney Island and wreaking havoc with plants and private gardens. How should the deer be culled? And how can the indigenous blacktail deer population be revived? Is hunting the way? Or will a cougar do the deed, a cougar that had swum across from nearby Vancouver Island only to be hunted by a rather lawless and immoral mercenary cougar-hunter? The reader is soon drawn into a more ominous reality. The further Mercer journeys, the deeper the tensions are frayed in this potential murder mystery as John Haffcut emerges as a sort of environmental Sherlock Holmes.

Haffcut remains throughout the novel the main protagonist, his last name part of his internal tornness — how deep should he cut into the troubling issues? Will a halfcut do or must the cut be faithful to a principle that cuts through compromises, deceptions, and betrayals? How far should John go as he clashes with obvious opponents and, more worrisomely, those near and dear to him?

Fat Cats probes, in intricate detail, layered motivations, temperaments, and ambiguous external challenges and, in the process, raises a perennial philosophical question: is a simple black and white way the wisest approach to seeing, interpreting, and doing, or is a more nuanced, refined, and long-term vision preferable, in which compromises must be made? Is this not the more mature way to achieve conflicting goals? Certainly the best and brightest divide regularly on which approach is best or most enlightened.

The reader is drawn, page by page, to the end of the novel as John Haffcut’s principled yet conflicted journey continues. The questions surrounding the death of an affluent landowner mount in intensity and the main actors on the stage collide and cooperate for different reasons. “Who is hunting whom?” becomes the leading question. The final pages reveal the unexpected ending to this fourth in Mercer’s “Dyed in the Green Series.” The ending leaves the reader wondering, who are the real fat cats?

The environmental issues faced on the West Coast, specifically here at the rural southern edges of the Salish Sea between Vancouver and Victoria, are woven in Fat Cats together into a finely textured tapestry in this must-read novel with a nail-biter ending. I’ve been lucky enough to have read the first three books in this series and I join other expectant readers in anticipating future volumes.