Jennifer Lau considers Lloyd Wong’s Trans-Pacific Mobilities: The Chinese and Canada, a collection of scholarly essays tracing the migration of people, ideas, and goods across the Pacific. Lau finds it “a useful and welcome anthology of ethnic Chinese in Canada and an introduction to the complex ebbs and flows of migration between the two spaces.” — Ed. 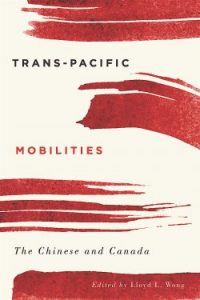 Lloyd Wong’s Trans-Pacific Mobilities: The Chinese and Canada provides a welcome breadth of knowledge on different groups of ethnic Chinese in Canada from the late nineteenth century to the present day.

Through the lens of mobilities — an analytical framework that includes physical immigration, economic capital, symbols, and culture transfer — the sixteen chapters, each a self-contained essay, are loosely tied together by a new paradigm concerning the messy and disorderly transnational migration of people, ideas, and goods.

While the collection suggests that it will provide “constellations of mobility” (p. 13) throughout the chapters, I did not find their interrelatedness sufficiently cohesive or explicit. I yearned for more editorial cohesion and more effort to distinguish patterns that, as a reader, I detected between some of the essays.

For example, there could have been a stronger connection made between the traditional spaces of Chinatown (Chapters 2 and 16) and the spaces of Chinese-themed malls (Chapter 15), to help mark not only the changes between the two, but also to clarify distinct ideas of “home,” which are always regional, specific, and unique.

The late David Chuenyan Lai ably describes early Canadian Chinatowns (Chapter 2) and contrasts the ways these spaces are perceived by contemporary society. I wanted to know who built these early Chinatowns and who possessed or acquired the skill required to craft Chinese architecture.

Some comparison might also have been made between early Chinatowns and more recent buildings such as the Heritage Town in Toronto’s Pacific Mall (Chapter 15) to help understand the history and perception of “Chinese” architecture from the early twentieth century to the present.

I was fascinated by the notion of a “Cantonese Pacific” as termed by Henry Yu and Stephanie Chan (Chapter 1), which brings together massive data to map out patterns of dispersion and migration of late nineteenth and early twentieth century Canada.

This particular wave, along with the Mainland Chinese migration of the last two decades, as studied by Eric Fong and Jenny Li, (“Locational Dispersion of Family Members: Chinese in Toronto,” Chapter 10), would have provided a ready-made comparison of similarities or differences in each group’s reasons for migration, differences in economic circumstances, sense of belonging through surname alliances, etc. Given the contributors’ overlapping research, this was a missed opportunity to have these chapters dialogue with one another.

Having said that, not all “ethnic Chinese” are the same, or can easily be compared simply because of a shared heritage. In the collection overall, except in chapters explicitly concerning the students and professionals from the People’s Republic of China, the marker of “Chinese” lacks nuance. Only a few chapters explicitly recognize the differences and complexities within the category of “Chinese” people. In Chapter 7, Lucia Lo, Shaolu Yu, and Wei Li note the complexities of the Chinese group-at-large succinctly and in a critical manner:

In the case of Chinese immigrants in Canada and the United States, these forces and frictions include the economic, social, cultural, and environmental contexts in Mainland China, Hong Kong, Taiwan, Canada, and the United States, the geopolitics between and beyond them, their immigration and emigration policies, place-based constraints and resources in the gateway cities and diasporic communities (p. 140).

Similarly, Shuyu Kong of Simon Fraser University in her essay (Chapter 4) on Chinese-language television considers the development of ethnic Chinese in Canada and the role of media in “mediating and facilitating various kinds of Chinese mobilities” (p. 84) in helping people settle into their new homes. She traces how geo-ethnic media — ethnic and geographically specific “cultural” programs, news, and entertainment dramas (p. 89) — have followed the immigrant trends, starting from Cantonese-specific channels to the growing Mandarin programming of Fairchild Television to reflect the needs and distribution of Chinese immigrants in Canada.

Kong’s chapter is one of the few to recognize the differences between the two Chinese dialects and the distinct origins of what is often considered a homogeneous group.

By contrast, in Chapter 6, Eva Xiaoling Li and Peter S. Li of the University of Saskatchewan overlook that Hong Kong, as a former British colony, influenced the integration and migration patterns of Hong Kongese to Canada, which distinguishes them from the experiences of ethnic Chinese migrants from the Mainland.

Hong Kong is not the only exception, of course. Singapore was also a British colony, giving it a political status that also affected integration to English-speaking countries such as Canada.

Moreover, connections with Cantonese immigrants who were already in Canada changed the experiences of newcomers from Hong Kong or Guangdong.

First, Paul Crowe’s reading of the transfer of Lü Dongbin rituals from China to Hong Kong, and then to Canada (Chapter 3), contains a fruitful and complex discussion of the movement of knowledge, ideas, culture, and people.

The circumstances of the transborder movement of this cultural figure through a historic lens helps understand (trans)regional identities created through daily practice and social networks. By focusing on the worship of this one figure against the backdrop of immigrant history, Crowe applies the mobility framework for a close and fresh look at familiar symbols and spaces.

Second, the essay by Sara Dorow, of the University of Alberta, on the China-Canada Adoption programs and lived experience of adopted children to Canada (Chapter 12), delves into the parents’ struggles with the definition and category of “immigrant” for their adopted child (p. 240), and defines how family is “a site of migrant identification formation.”

Dorow also identifies the “transnational spaces where objects both mundane and sacred […] do the work of commemorating, producing, interweaving, and sometimes curtailing birth and adoptive heritages” (p. 250).

Dorow’s complex reading of the transnationalism embodied by the children helps us in the “reimagining of local ways of being Canadian” (p. 254).

Third, in Chapter 13, Yan Zhang and Yan Guo’s essay on the transnational identities of Chinese immigrant children reveals that categories and markers used to understand identity can actually “obscure the opportunities to envisage their lives on a series of multiple planes and therefore restrict the possibilities for multiple identities” (p. 276).

These chapters and their vivid examples are especially useful and memorable as we continue to question categories of nation, ethnicity, and identity in our everyday lives and in our research.

I did have a few other concerns, for example a lack of information on Montreal and Atlantic Canada, which would have helped provide a fuller picture of the diversity within Canada of ethnic Chinese people and populations; and I also had questions about the source data and selection criteria for the nine examples used in Guida Man and Elena Chou’s “Gendered Practices of Middle-Class Chinese Immigrant Women Professionals” (Chapter 11), and the ten specific individuals selected for study in Shibao Guo’s “Double Diaspora: Chinese Canadians in Beijing” (Chapter 14).

I understand that perhaps one collection cannot cover all ground, but more authorial or editorial explanation might have clarified or strengthened the arguments.

Having said that, Trans-Pacific Mobilities: The Chinese and Canada will stand as a useful and welcome anthology of ethnic Chinese in Canada and an introduction to the complex ebbs and flows of migration between the two spaces.

Dr. Jennifer Lau studied English Literature and East Asian Studies as an undergraduate at the University of Toronto (B.A., 2009) and went on to pursue her Master’s degree with a SSHRC-supported exchange at the National Taiwan University. Her dissertation in East Asian Studies at the University of Toronto focused on Chinese and Canadian interactions of the nineteenth and twentieth century. She is interested in issues of translation and travel literature. Currently, apart from sessional lecturing, she is Associate Editor of a Canadian bilingual publication on modern Chinese culture, Fête Chinoise. Jennifer has been supported by a Social Sciences and Humanities Research Council of Canada’s Doctoral Fellowship, Joseph-Armand Bombardier CGS Master’s Scholarship, Canada Graduate Scholarships (Michael Smith Foreign Study Supplement), and a Canadian Studies Graduate Fellow at the University of Toronto’s University College.