Give Out Creek
by J.G Toews

Judy Toews’ first novel concerns Stella Mosconi of the Nelson Times as she struggles with two murders, a failing marriage, a budding romance, ethical dilemmas, and a suspect writers’ group. 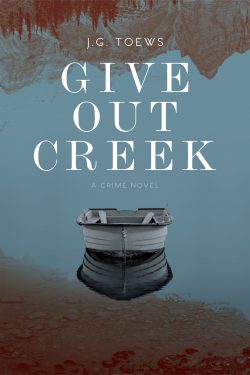 Bill Engleson praises Nelson writer J.G. (Judy) Toews for reminding him “of the draw of well-crafted fantasy over ugly reality.”

Give Out Creek was shortlisted for the 2016 “Unhanged Arthur” award – the Arthur Ellis Award for best unpublished crime manuscript awarded by the Crime Writers of Canada.

Arthur Ellis, real name Arthur English, served as Canada’s hangman between 1912 and 1935. He carried out over 600 hangings in his dubious career. — Ed

My review copy of J.G. Toews crime novel, Give Out Creek, the first in a planned series featuring journalist Stella Mosconi, arrived in late June soon before the latest American mass-shooting, this one in Maryland, which seemed like a variation on a tired, tragic, and familiar theme.

I turned off the news. For escape, I entered Judy Toews’ vaguely fictionalized community of Nelson, B.C. After the atrocities in Maryland, I found her imagined murders vastly preferable to the real thing. I was reminded of the draw of well-crafted fantasy over ugly reality.

We enter the countrified life of Stella Mosconi, refugee-reporter from the big city, mother of two young sons, and wife of Joe “Mr. Outdoors” Mosconi. The entire family has recently replanted to the small town.

We learn quite a bit about Stella. She grew up in Nelson. Her father left when she was twelve. “Her Mom hung in until she graduated from high school, after which neither of them could get out of town fast enough.” We sense that even now Stella might not be a happy woman. The move back to her hometown was more her husband’s idea. His new job at the local school precipitated their relocation. Almost as an afterthought, Stella has found a job reporting for the Nelson Times.

Even as Stella pursues the twisty trail to suss out the truth behind a first and then a second murder, a substantial chunk of the book involves fussing over the state of her marriage – and we bear uncomfortable witness to the knotty status of her conjugal conundrums, and we cringe at the matrimonial miasma of a second key character, Sergeant Ben McKean.

Back to the first death. From their perch on a bridge, Stella and Ben watch a police launch tow in a rowboat. Sprawled inside is the body of Lillian Fenniwick, retired lawyer – and a member of Stella’s book club. As the rowboat containing her friend’s body is being drawn in to the dock, Stella notices Lillian’s dress “twisted indecently high above the knees.” She immediately hurries to the body, and, though held back by Ben, says, “I just need to straighten her clothes … she’d hate for anyone to see her like that.”

Such a personal connection suggests a conflict of interest for a reporter covering the death of one of her page-turning book club. And, in fact, a rival younger colleague of Stella’s, reporter Jade Visser, poses that very question: “You know the victim? How can you be objective?”

And – pedant alert! — the ethics guidelines of the Canadian Association of Journalists specify that journalists must not “comment on the activities of any publicly elected body or special interest group … if we are active members of an organization we are covering, and that includes membership through social media.”[1]

But of course, Give out Creek is a novel, a work of fiction. Journalistic realism aside, some latitude is to be expected and desired. For crime purists, Nelson — the real Nelson — scored quite high in a recent Maclean’s magazine survey of the most dangerous places in Canada. While crime in general places the community at 66th  on a list of 229 communities over 10,000 people, as far as murder goes, it is a cozy 199th. For drugs etc., it rises sharply to 43rd. This latter real-world fact plays a part later as the plot pivots.

Give Out Creek is crawling with characters. Suspects abound. Most of them have at least one character flaw. One has recently been released from the hoosegow. He’s a piece of work. There is only one male member of the book club, a financial charlatan-evangelist who has introduced investment management into the sanctity of the book club ethos. A true villain indeed.

I sensed that anyone in Nelson might have homicidal appetites, even the sweet old guy who feeds cheese and baloney sandwiches to Stella on at least two occasions. I suppose it is the same everywhere. We are all capable of baloney and mayhem.

The reader is kept in the dark until the moment, not quite at the denouement, when the murderer is exposed in an unintentional alcohol-lubricated soliloquy.

I owe J.G. Toews a tremendous vote of thanks for reigniting my interest in B.C.-authored crime fiction[2] — and I look forward to the next book in the series.

Bill Engleson is an author and retired child protection social worker. Born in Powell River and raised in Nanaimo, he spent his first year of life trapped aboard his parents’ leaky fishboat. He lived in New Westminster for most of his adult years before retiring to Denman Island in 2004. He writes long and flash fiction, essays, poetry, and, of late, a short and suitably dim-witted play about The Donald. Occasionally he still writes letters to the editor. He self-published his first novel, Like a Child to Home, in 2013. Silver Bow Publishing released his second book, a collection of humorous literary essays titled Confessions of an Inadvertently Gentrifying Soul, in 2016. He is working on several new projects including a prequel to his first novel entitled Drawn Towards the Sun, a mystery, Bloodhound Days, and a collection of home-grown, satirical essays, DIRA Diary: Tall Tales of Democracy in Traction. Visit his website here.