Orca: How We Came to Know and Love the Ocean’s Greatest Predator 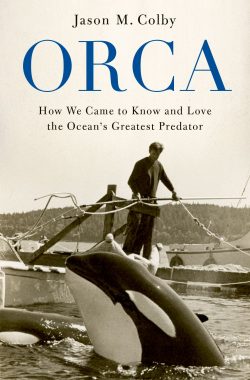 According to reviewer Anna Hall, a zoologist, Orca: How We Came to Know and Love the Ocean’s Greatest Predator by UVic’s Jason Colby contains “a wealth of information and tells the stories of the captive whales and the people who pursued, cared for, and studied them — and ultimately fought for their freedom.”

An environmental historian, Colby was born in Victoria when his father worked as curator for Sealand of the Pacific in Oak Bay, and he grew up around Seattle.

It was a quiet day in the summer … when the shots rang out … the injured mother [killer whale] pushed her child toward the tour boat. We could see the wound oozing blood…. It really seemed that she was showing us: “Look what you humans have done.”

This was not a scene from a fictional movie, this was not something that was made up. It was real. It happened in 1983 in the famous waters of Robson Bight, a small bay at the north end of Vancouver Island. Today, witnessing a mother-calf pair of killer whales (or orca as they are also known) suffering from intentional gunshot wounds is nearly incomprehensible.

Featured in Jason Colby’s Orca: How We Came to Know and Love the Ocean’s Greatest Predator, this relatively recent incident was not an isolated event. The perpetrators were never captured. Rather, scenes such as this were commonplace in the coastal waters of British Columbia and Washington State where marine mammals were hunted with few restrictions. Not so long ago, fur seals were killed by the hundreds of thousands and killer whales were feared, hated, hunted and harpooned.

These times are nearly forgotten, but Colby’s Orca will ensure that this dark period when killer whales were shot, corralled, starved and sold will be remembered. He shows that the damaging effects of yesterday’s actions and attitudes continue to affect west coast killer whale populations.

Colby has meticulously researched and documented the people, actions, and policies that fundamentally changed the way we view killer whales today. He presents memories and archival material without judging them from today’s perspectives and attitudes. His summaries of the natural and social histories of coastal waters are superb.

Colby’s story ranges from Moby Doll, who was harpooned and held in the Burrard Dry Docks, to the helicopter and vessel pursuits that resulted in the world’s most famous captive killer whales, including Namu, Skana, Haida, Lolita, Miracle, Corky, and Shamu, who were caught with their wild whale families before being, selected, isolated, and shipped to aquaria around the world including in Vancouver, Victoria, and Seattle.

An exceptional book and a significant contribution to the conservation of killer whales, Orca brings together a wealth of information and tells the stories of the captive whales and the people who pursued, cared for, and studied them — and ultimately fought for their freedom. By telling the stories of individual whales captured during a societal transition between an exploitative frontier and the modern era, Colby reminds us that attitudes towards killer whales have changed considerably.

Orca begins when killer whales were considered nothing more than vermin, when the U.S. government sanctioned the directed killing of killer whales by federal scientists at the Marine Mammal Biological Laboratory in Seattle, and extends to more modern and familiar perspectives. This book is of the same exceptional calibre as American writer Erich Hoyt’s classic Orca: The Whale Called Killer (Camden House, 1981), set in the waters off northern Vancouver Island.

Today, B.C.’s killer whales are protected as they swim between the mountainous coastal fjords and the expansive open Pacific. This is the home of Canada’s most famous killer whales and a coastline where these magnificent marine mammals are individually recognized and well-known by coastal residents and visitors alike.

Public opinion and scientific attitudes now ensure that killer whales are treasured, respected, and protected. Federal laws ensure their rightful place within the ecological tapestry of the wild coastal ecosystem. Anything otherwise is almost unthinkable — but it was not always this way. Colby reminds us of times when killer whale pursuits, shootings, and captures in our coastal waters were commonplace and accepted. Remembering this history is vital to our future and critical for the conservation of killer whales.

The future survival of killer whales in B.C. and Washington requires the full story of these whales’ remarkable survival, and Colby’s book assures us that the people, whales, and the concerned institutions are not forgotten.

Jason Colby’s Orca is a valuable resource of the coastal living history of wild and captive killer whales alike. It instantly takes its place as one of the best books ever written about the interactions between killer whales and settler society on the coastlines of B.C. and Washington State. It should be read by every whale enthusiast, naturalist, fishing guide, graduate student, researcher, marine resource manager, and politician on the Pacific coast.

Dr. Anna Hall is a marine mammal zoologist on Vancouver Island. She has applied her expertise in marine mammal conservation and protection to many situations and industries including shipping, wildlife tourism, coastal and in-water construction, demolitions, the Canadian Department of National Defence, and the U.S Naval Pacific Command. Her current research examines harbour porpoise mother-calf pair nearshore habitat use in B.C. and Scotland. She also studies Burmeister’s porpoise in Chile. She was one of three Canadians on the 2017 Sea of Cortez Expedition for the critically endangered porpoise, the Vaquita. Her experience includes oil spill wildlife response in France and work for the B.C. Marine Mammal Stranding Response Network and the federal Killer Whale Recovery Team. She works at Sea View Marine Sciences in Metchosin, serves as president of the Porpoise Conservation Society, has been elected a Fellow of the Zoological Society of London, is an Adjunct Professor at Royal Roads University, and was recently appointed to the Canadian Species At Risk Advisory Committee by the federal Minister of Environment and Climate Change.