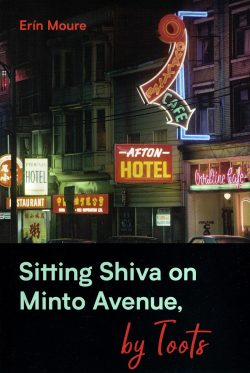 It is three weeks after the death of her former lover, Paul Émile Savard, when author Erín Moure learns he is dead, and that he died alone at St. Paul’s Hospital in Vancouver at the age of seventy-two.

Savard had been admitted into hospital and diagnosed with pneumonia, had Chronic Obstructive Pulmonary Disease, had smoked heavily for years, and had died of a heart attack.

Moure begins writing the evening she finds out that Paul is dead. She decides to sit Shiva, a seven-day period of mourning followed in the Jewish tradition. During this Shiva, Moure writes what has now become her book, a list of what she remembers about Paul, whom she refers to as “the little man.”

Moure’s writing is poetic and is often composed of paragraphs of just a few sentences or sometimes just one, which adds to the dramatic impact of the story she is telling. She refers to her text as “chiasmic,” a crossing over into someone else’s life, in this case Paul’s:

I miss my memories of the little man, I want to say, which is why I am writing them down, as I don’t want to lose my memories of him, of Paul Émile Savard.

In her grief, Moure tears her coat, as is customary in the Jewish tradition to rip one’s clothing while mourning. On the seventh day of sitting Shiva, Moure holds vigil, to honour Paul’s last day, which he had spent in his room in the Hildon Hotel, a single room occupancy unit in Vancouver’s Downtown Eastside, before he was admitted into the hospital the next day.

She makes pâté chinois, Shepherd’s Pie, a dish that Paul often prepared for her. She lights candles and sets her alarm for 1:30 a.m. Vancouver time so she can get up and play a Dean Martin song because the words remind her of the little man.

As she prepares the meal she cries, and in her tears, she feels the loss of him in her body, misses hearing his voice, the way he used to phone her and say “Hey there, Toots, how’s it goin’?” He used to also say, “Shine on me, little star,” when speaking about the sun or the streetlights.

When writers grieve a loved one through writing, often they are trying to mine the mind and body of any lingering memories of this person, to salvage any remains to keep from forgetting, an urgent last attempt at holding onto what they simply know they can’t, in an effort to remember.

Moure’s voice is honest, and as she writes freely and deeply, her vulnerability is revealed through language. The narrative is easy to follow, and as it weaves back and forth through time, we learn about everything that links to the little man’s life, from the larger historical context down to the minor details of the clothes Paul wore.

In this non-linear memoir, Moure uses memories and Google searches in an attempt to piece together everything from the basement suite she and Paul shared together in Vancouver to the restaurants they frequented in the 1970s and early 1980s, to Montréal’s Notre-Dame-de-Grâce, where Paul lived as a child, in what she calls “a work of social history.”

Here Moure walks us through mostly urban areas of Canada, showing us both histories and geographies, examining places such as Décarie Boulevard and Belmont Amusement Park in Montreal, to the Hastings Racecourse, Chinatown, and Gastown in Vancouver.

Through this history, we learn that Paul’s parents had been colonists in the Abitibi region of Quebec, and that Paul was carrying the trauma of this difficult life in his own body. We learn that Paul was an alcoholic; however, Moure insists that despite threatening her life, she does not wish to remember Paul for his often violent behavior when under the influence, because “that was not who he was.”

Moure doesn’t want this little man’s life to be reduced to alcoholism. She says she would like to hold onto his goodness and to his purpose. She desperately would like his life to be made visible, instead of invisible:

I refuse now and forever to let the life of the little man be ungrievable.

Moure’s work asks her readers to reflect on the way in which we remember people and how much of this remembering is built upon memories we want to keep and those we would like to leave out. Moure tells us Paul was an excellent lover. He helped many people and cared about others. He believed the spirit lived in everything, and he did not kill anything, even insects. He kept all of Moure’s books of poetry and letters. He was the first person Moure fell in love with and the first who knew she was a lesbian, when she said she scarcely knew herself.

I loved him because he seemed neither like a man nor like a woman to me but like an angel. I could tell by his perfect small hands and by his ears, which were straight and tall and had beautiful lobes.

They went to Vancouver City Hall and almost got married, but the front door was locked due to a garbage strike and so they went to a bar across the street for a drink instead. They broke up and spoke of reconciliation, but ultimately Moure left Paul in 1982 and eventually moved to Montréal. It had been eight to ten years since they had last seen one another when she found out about Paul’s death. She had thought of visiting him when she was in Vancouver but says she knew she couldn’t get involved with his problems, his alcoholism.

By this time, Moure had also fallen in love with someone else, a woman who she refers to as “B.” Yet though Moure has moved on, she misses Paul and finds herself being pulled by the weight of grief, and of what she remembers of him, and of what he has taught her. Sometimes, Moure says, it’s those who are less known who show us what matters, who open us up to beauty:

He told me once that the most important thing about the sky, that most people forget or never acknowledge, is that it comes down to the ground. In fact the sky touches the ground. We don’t have to look upward to be in the sky, we are always in it, it meets us and touches us.

The outlines of our bodies are always, always, touched by this sky.

When the reader gets to the end of Moure’s book, they too are filled with emotion, and are grieving alongside Moure. For not only has she brought the reader into the life of her little man, her words have also brought her little man back to life.

Now he belongs to everyone. We can all grieve him together. As we all feel sadness in the loss of Paul Émile Savard, his life becomes grievable. His life is grievable. Which is exactly what Moure wanted. 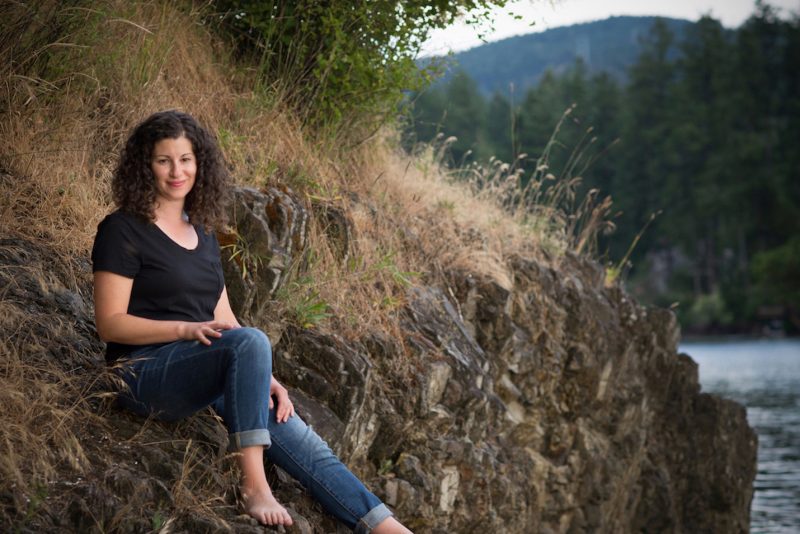 Claire Sicherman is the author of Imprint: A Memoir of Trauma in the Third Generation (Caitlin Press 2017). She facilitates a Journaling Circle on Salt Spring Island, which is part of a multi-generational writing project called Home Words. Photo by Ramona Lam.