The Locomotive of War: Money, Empire, Power, and Guilt
by Peter Clarke 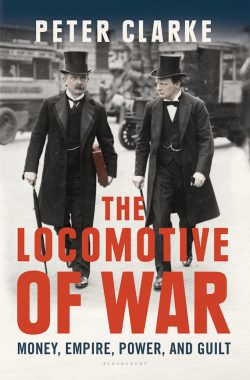 Prominent British political historian Peter Clarke (born 1942) divides his time between Cambridge and the Gulf Islands. Married to Canadian cultural historian Maria Tippett, Clarke was professor of modern British history at the University of Cambridge from 1991 to 2004 and master of Trinity Hall, Cambridge, from 2000 to 2004.

In his latest book, The Locomotive of War: Money, Empire, Power, and Guilt, Clarke takes his cue from Russian revolutionary Leon Trotsky: “War, comrades, is a great locomotive of history.” For Trotsky, notes reviewer Stan Markotich, the Great War was “the magnificent vehicle of social and political revolution consecrated by Marxist philosophy” – but Clarke shows that it also affected the fortunes and character of liberalism in Britain and the United States. – Ed.

Are we simply better managers? This was the thought that gnawed at my psyche as I finished the last few sentences in Clarke’s brilliant study of Liberal and liberal men who presided over the destruction unleashed by the Great War.

On the surface, The Locomotive of War reads like a series of vignettes, detailing the common and exceptional elements of the lives of an Anglo-American elite. The account of this pantheon of class advantage introduces Gladstone, Woodrow Wilson, David Lloyd George, the Roosevelts, Winston Churchill, John Maynard Keynes, and a list of many others, in an effort to account for their roles in defining, preserving, in some instances hindering, and advancing liberal democracy in the twentieth century.

At first glance a prosopography (collective biography), Clarke’s work subverts the genre with a skillful accounting of how these individuals strayed from common ideological ground without anyone abandoning it, despite a socio-economic glue that perhaps forced them into suffocating political relationships. Clarke also explains the differences in ideology among the Anglo-American elite.

Yet when the story opens, the discourse centres, albeit briefly, on Leon Trotsky, portrayed as a sincere if humourless radical with limited and ultimately impaired judgement. This revolutionary latecomer to Bolshevism, Clarke reminds readers, hailed the Great War as the magnificent vehicle of social and political revolution consecrated by Marxist philosophy and as an agency fated to trigger a conflict between the producing and exploiting classes within each state, within each nation.

The proletariat would bury capitalism.

Trotsky’s vision held no notion of any possibility for liberal democracies’ survival. For Trotsky, scientific socialism meant class war, and there was no allowance for any possibility of a Plan B.

As readers find themselves reacquainted with the liberals who defined the Great War and the approaches to its coming, the figure of William Gladstone emerges as the anchor of morality in and for politics. The influence of this figure, bound by no national or imperial borders, seized Woodrow Wilson, and so much so, that even at an early age the future president “became peculiarly fascinated by Gladstone” (p. 15). Thus, when war came, Wilson and some in later British generations, agonized over the moral dimension of becoming involved in the conflict, and then of defining a new and familiar ethical world.

Yet was it the case that these Gladstonians were trapped in old paradigms? Here Clarke’s thesis unfolds with observations that suggest this seemed absolutely the case — at least for some. Some of these leaders understood that the world was changing. Perhaps they remained intimately unaware of the details of any dynamics, but there grew a sense that peaceful and unfettered global trade within a static world system amounted to a vision grounded in a “Garden of Eden” of sorts and in paradigms that could no longer survive unreconstructed.

Clarke observes that while some toiled in a new post-war environment hindered and dependent on views of revenge, war guilt, reparations, and an increasingly redundant morality, others saw economic changes and made it their mission to respond to new conventions.

And so those who fathomed new economic possibilities and who could embrace new social relationships as a positive ingredient in forging a post-war reality emerge as the protagonists in early twentieth century history.

Here, the figure of Maynard Keynes stands peerless. His notions and theories, which undermined the ideal of laissez-faire economics and advocated for a successful symbiosis between government policy and economic reality as the means for sustaining democracy, began to take shape in the turmoil of world war.

Keynes’s ideas created a foundation for spreading wealth throughout and across social hierarchies and laid a foundation for a new, rather updated, liberal international system. These eventualities are only hinted at and briefly detailed throughout most of the book before being addressed rather directly in the concluding chapters.

And as with every great story, this one finds its antagonist, for reasons and in ways I shall leave the reader to discover, in Lloyd George.

In time, Clarke maintains, Keynes’s wisdom was received by fellow liberals in both the United Kingdom and in the United States. Churchill, noted for his pragmatism and ability to switch political loyalties at will, and Keynes formed bonds based on mutual admiration and agreement. Franklin Roosevelt, later to take up Keynes’s ideas, evidently found some difficulties in comprehending the abstract and philosophical in the economist’s work.

And so from one vision of liberal democracy to another, Clarke sees the Great War, Trotsky’s locomotive, as an agency of profound transition, and one of revision prompting liberalism to adapt. As there was a shift from moralizing to the preoccupation with the realities imposed by the realm of things material, there was evolution and no repudiation of matters ethical. After all, says Clarke, Keynes bargained in both ethical philosophy and economics.

The Locomotive of War is not a book that delves into many details of the conflict. There is no social history of soldiers or of armies of unemployed. There is barely a mention of the Bolshevik revolutions that gripped much of central Europe in the wake of the peace that marked the end of the First World War. Indeed, nothing here surfaces that aims to resolve the issue of Germany’s war guilt. For those matters, readers are advised to consult other works.

However, if one is motivated to understand how liberals, those of the highest social ranks, found passage on the great “locomotive” and rode not merely to survival but eventual prosperity, leaving Trotsky and his rigid notions to obsolescence, Peter Clarke’s The Locomotive of War warrants careful and nuanced reading.

Born and raised in Vancouver, Stan Markotich completed his undergraduate work at Simon Fraser University in 1985. From there, he went on to receive a master’s degree from the University of Victoria. In 1987, he moved to Indiana University, earning his doctoral degree in history under the supervision of Dr. Barbara Jelavich. Upon graduation, Markotich accepted an appointment with Radio Free Europe, serving as Serbian analyst and remaining in Europe for roughly a decade. During that time, he served in a variety of capacities, including as Senior Policy Advisor with Bosnia’s Independent Media Commission, with a secondment from the Canadian Ministry of External Affairs. Markotich has published hundreds of academic and popular articles as well as book chapters. He is the main author of White Paper of the Independent Media Commission: Media and Democratisation in Bosnia and Hercegovina (2000). Markotich is currently revising a memoir that deals with his years in the Balkans. Now based in Greater Vancouver, he teaches classes at a private school, lectures for Brock House Society, and offers courses on the Balkans through SFU Continuing Education.