It Can Be Done: An Ordinary Man’s Extraordinary Success

by Chick Stewart and Michele Carter

Donald “Chick” Stewart moved to B.C. from a chicken farm in Manitoba in 1942 when he was fifteen years old. His first job was straightening boards at the Youbou sawmill on Cowichan Lake.

By 1963, aged 31, he was ready to buy his own sawmill. “I knew Vic Rempel was a really good sawyer and that together we just might do this,” Stewart writes in It Can Be Done. “We were seventeen when we met at B.C. Manufacturing in New Westminster. Our last names were Stewart and Rempel, so we called it S & R Sawmills.”

Chick and Vic started a custom-cutting mill on a two-acre site the banks of the Fraser River at Port Kells in Surrey. S & R now employ 500 people at five sawmills along the Fraser and produce 240 different sorts of lumber for their major buyers in Japan and California.

Chick Stewart, notes reviewer Michel Vallée, “leaves us with no doubt that his love of the industry, good will, and hard work has a great deal to do with his success.” — Ed 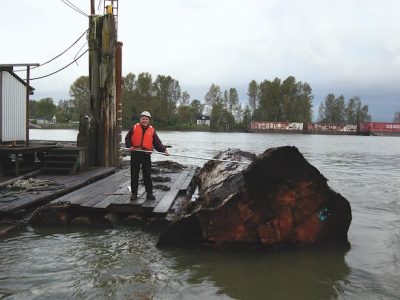 I did not deal with the custom-cutting part of our business, but I did, on one occasion, meet Mr. Stewart and often wondered how one man could have assembled a sawmilling empire from empty pockets; so I accepted the task and found myself with an absorbing book about Chick Stewart’s life.

When I opened the book’s cover I was a bit apprehensive — there is an old saying that we all have one good book in each of us!

In most cases, these autobiographies start off with, “I was born in…, “We were poor…,” “We had a simple family life.…”

This book pretty well starts off the same way — but if the reader persists and gets through the first couple of chapters on Chick’s early family life on the outskirts of Winnipeg, the real meat and potatoes of his life and his career as an entrepreneur provide a good nourishing meal.

It Can Be Done covers Stewart’s life from his early childhood through adolescence and onwards; he describes his relationships with friends and family and his daily life experiences on the Fraser River as an ambitious and energetic young man.

From there, the book follows his life as a career sawmill worker, from the Cowichan Valley to the lower mainland and then to northern Vancouver Island with his wife and child in tow, before eventually returning to Vancouver. Along the way he gained experience and developed his management skills.

The real story of Chick Stewart’s business success in the sawmilling industry begins with his “good luck,” as he likes to call it, in being unjustly fired from a night shift supervisor’s position at a Vancouver sawmill.

With an old and trusted friend, Vic Rempel, he took the “plunge” into self-employment and, as the saying goes, never looked back. Throughout It Can Be Done, Stewart gives great credit to his good fortune and great luck and tends to downplay his good business sense and hard work — and his unusual and sometimes useful skills, such as scuba diving.

Throughout, we follow Chick’s career and involvement in the B.C. forest sector and his steady path to becoming one of the most respected sawmill operators on the west coast.

He leaves us with no doubt that his love of the industry, good will, and hard work has a great deal to do with his success.

Even through the difficult up-and-down periods in this very cyclical industry, when others were failing, Chick Stewart kept his cool, made the hard decisions, and took the risks needed to grow his business. It doesn’t take long for the reader to realize that his success was due more to shrewd business sense and a fine product than to good luck.

As the sawmill operation grew, and as he worked side by side with family and friends, Stewart developed other interests and ventured into different businesses. He opened a seasonal sports fishing venture in northern B.C. (Babine Steelhead Lodge), and flew there with his wife on weekends to oversee the well-being of the enterprise.

His other ventures include overcoming political challenges to build a golf course with the help of golfer and course designer Arnold Palmer (Northview Golf and Country Club in Surrey) and making significant contributions to social projects such as the Czorny Alzheimer Centre in Surrey, named after his wife Marilyn Stewart (née Czorny), who died in 2014.

Michel Vallée grew up in Quebec City and Montreal. After high school he came to B.C. to attend university, first completing a technology diploma at Selkirk College (more to learn English) before moving on to UBC. After university he worked for the National Parks warden service for several years before moving on to various positions in the forest industry and finally settling on a teaching career at Vancouver Island University (formerly Malaspina University-College) where he’s been for the past thirty years. While at VIU, Michel maintained his hand in the forest industry as a partner in a forest products company for over twenty years — the four partner company specialized in log buying, selling, underwriting independent harvesting operations, purchasing and developing government and private timber sales and custom sawmilling cypress for Asian markets. At VIU, Michel manages the forestry department’s international exchange program and teaches silviculture and soil science. Michel sat on the board of directors for the Coastal Silviculture Committee, the Festival of Forestry, and the Canadian Institute of Forestry – his last year as President.