#227 Specific to the Pacific

REVIEW Refugium: Poems for the Pacific

by Yvonne Blomer (editor), with a foreword by Adam Olsen. 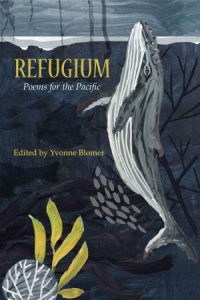 What is a Refugium? Yvonne Blomer, editor and guiding spirit of this anthology, borrows her definition from the Canadian Oxford Dictionary as “an area in which a population of organisms can survive through a period of unfavourable conditions, especially glaciation.”

Online we find variations, from “a location which supports an isolated or relict population of a once more widespread species,” to something closer to the fish tank in your doctor’s waiting room: “A small aquarium that either sits next to or hangs onto an existing saltwater or reef aquarium … to continually cycle water into and out of the existing tank.”

So a refugium is something small attached to something bigger in order to aid the slow processes of survival and revival. These are not poems about or to the ocean, but for it.

As the City of Victoria’s poet laureate, Blomer decided to use her position “to do something to draw attention to the plight of the Pacific Ocean.” She hopes to start a conversation “on grief and the solace of poetry,” as she told Amy Reiswig of Focus Magazine (Sept. 6, 2017):

I hope the book isn’t the only place that the Pacific Ocean thrives in 20, 40 or 100 years from now.… But in creating a book that is for the Pacific, a refugium for it, I hope we’ll inspire creation of real-world or outside-the-book refugia.

In her poem “Water and Weeds,” which is not included in the anthology (regrettably none of her own poems are), Blomer writes, “When I begin to write, I want the lines of a poem/ to be the small pebble that drops to the water’s depths.” I think that is what she wants for all the lines of all the poems in Refugium.

The Pacific Ocean is the object of considerable artistic attention of late. Refugium launched at the Maritime Museum of B.C. on October 5, 2017, in tandem with an exhibition of work created by 21 visual artists in response to the book. The Pacific, the inaugural exhibition at Emily Carr University’s Libby Leshgold Gallery, considers the ocean as “a shared and connected space.”

In Spectral Tides at the Nanaimo Art Gallery, the Korean-born Canadian artist Jin-Me Yoon looks “here and there across the Pacific … a body of water shared at the margins by the place where she was born and the place that is her home … tides rise and fall at different times and different places, yet they are connected by a shared ocean.”

But Refugium is less about connection and sharing than about isolation and grief. Looking out from B.C. shores, the poets are more likely to see garbage and plastic clogging the waterways than people looking back towards us. Of the eighty poets, only ten are from outside Canada – six from the U.S., one each from New Zealand, Australia, England, and Japan.

Kaneko Misuzu, author of the poem “The Memorial Service for Whales,” died in 1930, and her translators Yukari Meldrum and Alice Major live in Edmonton.

Of the Canadians, the vast majority live on the west coast. This is not the shared ocean — although it may be an Ocean that shares us.

Once we belonged. We belonged for wet
millenniums, then we exiled ourselves.

The poems that follow are vaguely divided into three sections: “Reflections,” “Humans on It,” and “The Living Infinite: Endangered,” with epigraphs by classic sea-storytellers Jules Verne and Herman Melville; by senior British Columbia poet Patrick Lane, warning that “sorrow and sorrow and sorrow will be ours;” and by Canadian science journalist Alanna Mitchell, author of Sea Sick: The Global Ocean in Crisis (McClelland & Stewart, 2009).

Many of the poems lament and berate. Oil tankers and styrofoam are everywhere. One gets the point but finds little poetry in Lorin Medley’s “Outliers of Industry” — “the head-banging, carbon-dioxide-breeding crowd” — or Emily McGiffin’s  “Coal Trains:”

… beach vacations
GoreTex, all the little
party favours of the age.

In “The New Jerusalem,” Joe Zucchiatti wants “plastic to look like plastic again.” He imagines a religious icon comprised:

of a disposable shopping bag
discarded and windblown into the ocean
incandescent in the wave
like an angel headed homeward
to that heavenly vortex
where all the other
faithful, dutiful, discarded
plastic bags have gathered.

Wendy Morton’s “I Walk to the Beach with Jenna after Watching This Changes Everything” has no real need of a poem; the title says it all, assuming we are all familiar with Naomi Klein’s message condemning the current era of neoliberal market fundamentalism.

In “Rich,” Christine Lowther reconciles the underwater domain with the prevailing threat, and she more subtly references Klein:

Cut the engine tie one rope to the dock drop everything
dive in clothes on best to purge it all wash the day’s
drain from body and clothing
the water cold, so cold, changes everything.

It is not impossible to blend poetry with propaganda. In his richly allusive “Glenairley: An Elegy,” David Pimm memorialises Pisaster ochraceus, the purple sea-star:

Life passes in the intertides,
where purple pentangles
once broadcast their spawn —
talisman for a decade
glimpsed between beach huts.
Now I read of viral lesions, wasting,
shed star-arms — wave-washed
mush, gone. As I write, my hand
both amanuensis and echo.

They died
facing west,
the direction of last things —
like England’s monasteries.
dissolved.

Refugium’s poets pay homage to sea creatures: salmon and whales, obviously, but also parrotfish, turtles, glass sponges, a molting elephant seal, and jellyfish — especially jellyfish. I counted at least a dozen jellyfish poems. Brenda Hillman in her incantatory “Pacific Ocean” tells the jellyfish “you are not ‘endangered’ yet.” Perhaps it just feels good to write about “moon jellies.” One cannot always be with M.W. Jaeggle, “barrelling/ towards global peak.”

I want an anthology to contain one or two poems I can make my own. Refugium gave me Kate Braid”s “Small Boat: IV.” I recognise that trauma that was supposed to be pleasure sailing:

I swore I wouldn’t be afraid, this time.
I’d cast off, fenders
(I know the word, took the course)
curl the rope (line) carefully, stow it
where I can reach it again, quickly
and (I hope) soon, soon
as we reach the far shore. I swore

I wouldn’t be afraid only you didn’t tell me
there would be white caps and this upward diving
into a wilderness of water.

Another personal favourite is Luther Allen’s “Sinking,” which reminded me of Lummi Island boats even before I learned that was the poet’s island:

there are those of us
at the bow of the boat
breathing deeply
eyes front
teeth bared
for anything.

and the dwindling orcas
who would say
if they could
there are too many boats
heedless
no matter the gaze.

All is not doom and gloom. Tim Bowling’s “Found Poem of Strait of Georgia Insults” begins: “You’re a Dull Oregon grape you black-bellied plover of a long-billed dowitcher. You lugworm, you screwshell,” and then tumbles gleefully through a perverse celebration of maritime names, concluding with “Goddamned mud shrimp. Surf scoter. Seaclown triopha. Gribble. Sea noodle. Dunce cap limpet. Bladderclam. Whelk.”

I miss the grizzled sailors at Telegraph
who smelled of wood smoke, tobacco and rot
gave us line when ours snagged,
yanked us out when we tumbled from the dock

I miss when the Feds owned everything worth anything on the sea,
prawn boats always full, logs the size of houses, everyone we knew
living aboard or building one in their yard. Then we cursed
out every powerboat on Channel 16, sidled up
to sandstone at Gabriola, nabbed flounder, threw
the same dogfish back cast after cast, his mouth
bloody mess, still he went
and went for the bait.

Blomer would “like every reader to refuse plastic bags and straws, to buy drinks in reused glass or tin, and to think before buying or throwing something away … to consider what we eat, how we get around, what we wear and where it comes from, what we use and where it will end up.”

But surely anyone who looks inside Refugium is already committed in some measure to this way of refusing, buying, throwing, and considering. We know about Russell Thornton’s “bitumen-slicked” shorebirds and Betsy Warland’s Great Pacific Garbage Patch, where “countless marine animals die.”

And we recognise the frustration of Anne Hopkinson’s activism:

You sign that petition, send that letter, stand
at the legislature, not once — once is not enough —
but again and again
until the law is strong,
until it is enforced

But is this poetry? And if so, is poetry an effective way to send the message? And to whom is it sent besides those who already stand and sign?

Yvonne Blomer beckons. “I’d like you to think of this book as a hand held out to you, inviting you into a conversation that is one part of a larger conversation, perhaps the most important one to take place in our Anthropocene age.”

A conversation consisting on one side entirely of poetry risks offering too many of what Joe Rosenblatt in The Lunatic Muse called “poems fabricated at will and filled with hamburger helper, poems devoid of any real poetic inscape” (The Lunatic Muse [Exile Editions, 2007], p. 118).

It is not clear that the poetic muse can thrive on good intentions. Arleen Paré’s “Verses, the Ocean, the Tipping Point,” concludes:

That is another risk: that the reader on the shore of the Pacific — exposed to eighty poets lamenting, grieving, and advising — may succumb to “complete overwhelm.”

And that would be a pity.

Many of the poems have been previously published, but the poet who writes a poem with a message presumably wants to repeat the message as often as possible. The poetry reader who is also an activist — or about to become an activist — now has a rich source of quotations.

They, and the Pacific Ocean, now also have a protest song, “False River” by Bruce Cockburn:

False river
dark flow
How far do
we have to go?
Torrent tumbles
to the sea
This ain’t the way it’s
supposed to be
False river

The lyrics are in Refugium, and you can find the Cockburn performance on YouTube https://www.youtube.com/watch?v=FhBXirzp3Ic

Phyllis Parham Reeve has written about local and personal history in her three solo books and in contributions to journals and multi-author publications. Recently she wrote the foreword to Charlotte Cameron’s play, October Ferries to Gabriola. She is a contributing editor of the Dorchester Review and her writing appears occasionally in Amphora, the journal of the Alcuin Society. A retired librarian and bookseller and co-founder of the bookstore at Page’s Resort & Marina, she lives on Gabriola Island, where she continues to interfere in the cultural life of her community. More details than necessary may be found on her website: http://www.phyllisreeve.com