Emily Carr As I Knew Her

by Carol Pearson, with a foreword by Robert Amos. 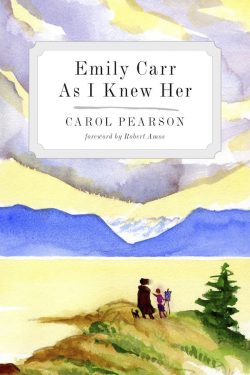 Our understanding of the internationally significant artist and author, Emily Carr, is enriched by this overdue reprint of Carol Pearson’s Emily Carr As I Knew Her, first published in 1954 (Toronto: Clarke Irwin).

The painting on the cover by Robert Amos is the perfect one to take us to Beacon Hill Park and the Strait of Juan de Fuca where Carol Pearson and Emily Carr sketched together.

This engaging selection of stories about the intimate friendship between the creative dynamo Emily Carr and Carol Pearson has long been out of print. A few well-worn copies exist in libraries, but most people who have read Carr’s own books are unfamiliar with Pearson’s work. I commend Touchwood Editions for reissuing Pearson’s twenty vignettes about her treasured times with Emily Carr.

So why has this book languished in obscurity for over fifty years? Some writers of Emily Carr biographies ignored this source. Doris Shadbolt (The Art of Emily Carr, Douglas & McIntyre, 1979) was one, while others, such as Edythe Hembroff-Schleicher (Emily Carr: The Untold Story, Hancock House, 1978), claimed that this friendship was an imagined one.

Maria Tippett’s fine biography Emily Carr (Oxford University Press, 1979) is generally considered to mark the beginning of putting flesh on the bones of the celebrated artist; up until then a thorough study had not been done.

Tippett does make reference to Carol Pearson and even provides visual evidence of a photograph of Pearson pushing Carr in her wheelchair around Beacon Hill Park just months before her death in 1945.

The well-researched biography by Paula Blanchard (The Life of Emily Carr, Douglas & McIntyre, 1987) also acknowledges the relationship between Pearson and Carr. I have no doubt that the friendship existed. Carr herself mentions Pearson in letters to various other close friends, including Ira Dilworth and Eric Brown.

Is it true that Carr visited Pearson when she went to Ottawa for the groundbreaking exhibition in which she was featured along with Charles Edenshaw and some members of the Group of Seven, Exhibition of Canadian West Coast Art: Native and Modern in 1927? Yes, there is evidence.

Edythe Hembroff-Schleicher denied Pearson’s close friendship, insisting that if a friendship had existed between a young artist and Emily Carr, it belonged to her and no one else. As a very fine researcher Edythe should have realized how Carr liked to compartmentalize her friendships. Often one friend had no idea of the existence of another.

Another example of this pigeonholing is with what Carr called her “Listening Ladies,” a triumvirate of intelligent, articulate, and well-read women who were each given a draft of her stories for comment. Carr separately gathered these from Flora Hamilton Burns, Ruth Humphrey, and Margaret Clay, in the process taking some criticism — and rejecting most — as part of her creative process.

Each woman at the time thought she was the sole “reader.”

Hembroff-Schleicher took her brief position very seriously as a special adviser on Emily Carr to the Province of B.C. Even after the term ended in 1982, she continued to arbitrate on what was fact and what was fiction. Had she not dismissed Carol Pearson, this reminiscence might have been expanded into subsequent collections of stories.

Pearson’s book, written nine years after Carr died (March 2, 1945, not 1944, as a typo in the foreword states), is an intimate account of her warm and loving relationship with Carr, but it fell into the penumbra cast by the well-marketed books on Carr, especially in the decade following the books by Tippett and Shadbolt in 1979.

While researching my own slim book on Carr, Sunlight in the Shadows (Oxford University Press, 1984), I read correspondence that included references to Carol Pearson. I also found her mentioned in the pages of Carr’s handwritten journals. I don’t doubt for a moment that there was a special bond between the imaginative child and the brilliant artist.

Recently I examined a special Klee Wyck pottery brooch as well as a pair of earrings that Carr commissioned for her kindred spirit, Carol Pearson. As iconography, they employ the Northwest Coast form-line Eagles, described in three of Pearson’s stories in Emily Carr As I Knew Her, which Carr painted on the rafters of the attic in her “House of all Sorts” on Simcoe Street in Victoria.

The stories in this collection are totally consistent with what is known of Carr. The few factual errors are minor. The parrot was female, not male. Woo, Carr’s monkey, lived for many years after Carr gave her to Stanley Park. Perhaps Carr, always herself such a great storyteller, created an alternative ending because she was heartbroken at having to give up her animals due to ill health. Or perhaps this is the ending for Woo that Carol imagined. We don’t know whose story it really is.

Similarly, the facts about the purchase and state of Carr’s gypsy caravan, “The Elephant,” are somewhat inaccurate. Carr purchased this in 1933, when Carol had already moved away to Ontario. She might have been reading between the lines — or between the lines of a letter creatively constructed by Carr.

One of the services of Emily Carr As I Knew Her is its ability to help dispel the myth, perpetuated by contemporary film and fiction, that Carr disliked children. While research reveals many satisfying examples of her enjoying the company of children, somehow the myth prevails. Nor does Pearson mention the myth, initiated by Carr herself, that “her paintings were ignored by all but a few.” This statement always needs to be put in context.

I commend Touchwood for not sanitizing this 1954 book. Certain words and patronizing statements will shock and offend, but in the context of the 1930s and 1940s — and even of the 1950s, when Pearson wrote her reminiscences — it is important that they have remained unaltered. 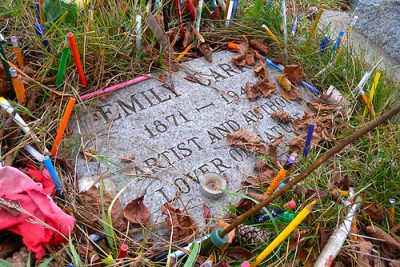 Emily Carr as I Knew her is a charming and engaging read with fine descriptions of Carr’s studio, her monkey, several of her dogs, her hired help, her sketching events, and much more. Pearson’s stories have an internal consistency and authenticity. They take the reader into Emily Carr’s private life.

Pearson’s stories flow with humour and sensitivity. As memory can sometimes do, there is a compression of time. The precise year of an event is sometimes blurred, just as with Carr’s own stories she sometimes invented an age for herself, usually much younger, to convey the emotional truth of what she was portraying.

Pearson concludes her book with an expression of gratitude for having Emily Carr in her life. Scholars and fans of Emily Carr will also be grateful that these stories are once again in print.

Kerry Mason, B.A. M.A., is an art historian, author, curator, and art consultant who lectures at the University of Victoria, University of Colorado, Victoria College of Art, and Vancouver Island School of Art, offering courses on Canada and British Columbia with an emphasis on Emily Carr and the Indigenous Arts of the Northwest Coast. Kerry has written many related articles, exhibit catalogues, and two books, Sunlight in the Shadows: the Landscape of Emily Carr (Oxford University Press, 1984) and The Life and Art of Arthur Pitts (Mother Tongue Publishing, 2017). She has curated more than fifty exhibitions for the University of Victoria and other institutions throughout North America. Kerry lives in Victoria.