HISTORY: It takes one to know one 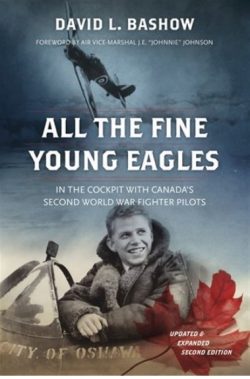 In All the Fine Young Eagles: In the Cockpit with Canada’s Second World War Fighter Pilots (Douglas & McIntyre $28.95) — an updated and expanded second edition — David Bashow takes the reader into the cockpit, as its subtitle promises, but it does much more than that. He seamlessly portrays Canada’s fighter war at the tactical, operational, and strategic levels, including the flawed three plane “Vic” formation, the debate over the “big wing,” and the use of “Ultra” code-breaking. He portrays a hopeful Winston Churchill lighting up a cigar on learning that Operation Sea Lion, the German invasion of Britain, had been postponed largely due to the efforts of the Royal Air Force (RAF).

Bashow’s own experience shows as a Cold War jet fighter pilot on a CF 104 Starfighter. He weaves in details like where pilots stow their gear, what it is like to sit on an hard emergency rubber raft while flying over the Mediterranean Sea, and the unusual use of pistols in the mess. His nuanced story extends from tales of aerial combat to passages about the simple joy of flying.

All the Fine Young Eagles is told mainly in the words of the pilots themselves, taken from hundreds of interviews. Bashow includes the history of Royal Canadian Air Force (RCAF) fighter squadrons and of the Canadian fighter pilots serving in the RAF. Sprinkled throughout Britain’s aerial warfare service, Canadian fighter pilots fought in all the battle areas where RAF squadrons were deployed, including several where Canadian ground troops did not fight, such as North Africa and Burma. 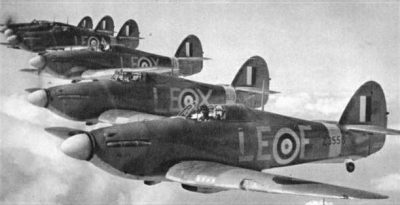 Bashow starts with a brief look at Canadian nationalism as manifested in the British Commonwealth Air Training Plan (BCATP) before moving on to RAF 242 (Canadian) Squadron, made up of Canadians already in the RAF. The Canadians in 242 Squadron included British Columbians Lorne Chambers of Vernon, John Latta of Victoria, and Richard Coe of Winfield.

On May 14, 1940, only four days after start of the German attack through the Ardennes, the Canadians of RAF 242 were in action. Bashow depicts the chaos of the overhead fighter action covering the British and French retreat to Dunkirk. The squadron successfully withdrew to England but was re-deployed to France in a vain attempt to prop up this ally. The squadron successfully withdrew, again, on the day France surrendered, shooting down thirty enemy aircraft but losing seven pilots killed, two wounded, and one a casualty to post-traumatic stress disorder. 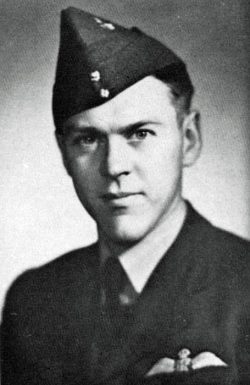 The Battle of Britain, the great fighter pilot battle of the Second World War, is well covered. Here Bashow includes a short but enlightening review of fighter tactics learned on the Western Front in the First World War and forgotten by everyone in the 1920s and 1930s — except by the Germans, who were forbidden an air force. Dangerous to use in combat, the tight three plane “vee” or “vic” formation that looked so good at air shows was held onto for far too long.

Bashow then considers the home field advantage of being able to recover pilots shot down over Britain. Experienced fighter pilots made up the critical RAF shortage because the British aircraft industry was doing an excellent job of manufacturing replacement fighters. Bashow also covers the innovative British radar system, missed by the Germans even though it was not hidden, as well as the Air Observers and the radio monitoring, or “Y” service, with its WAAF (Women’s Auxiliary Air Service) operators who eavesdropped on German fighter pilots talking in the air while diving to attack.

These women were frustrated in that they could not get their intelligence to the pilots who needed it in time. They were reduced to murmuring, “Oh God… oh God….please…please look up…”

The overall British strategy in the Battle of Britain was to attack the German bombers before they could drop their bombs. This made the “Big Wing” tactics advocated by Squadron Leader Douglas Bader problematic: by the time the squadrons were assembled in the air, the bombers had reached their targets, delivered their bombs, and were withdrawing.

Bader was given command of the returned RAF 242 (Canadian) Squadron that Air Vice-Marshall Trafford Leigh-Mallory described as “pretty rough and lacking in discipline; they’ve had a bad time in France.” The Canadians took to Bader and performed well in the Battle of Britain. Number 1 (RCAF) Squadron also arrived from Canada equipped with Hurricanes in time to take part in the battle. In their first engagement with German Dornier bombers, they shot down three and damaged four with the loss of one pilot killed. Overall Canadian losses in the Battle of Britain in both the RAF and RCAF were 23 fighter pilots.

With Britain now safe for a time, the action — and Bashow’s narrative — switches to the Mediterranean theatre, vital to Britain but a “backwater” to the Germans. Canadian pilots were in action here in North Africa and also in the centre of it all, Malta, an island under almost constant air attack.

In Chapter 4, “Win Some, Lose Some,” Bashow considers the 1942 raid on Dieppe from the Canadian fighter pilots’ point of view. One Hurricane pilot, Ron Emberg, delivered bombs on a German gun emplacement. Shot down, he managed to land on a golf course, climb down a cliff, swim out to sea, evade German E-boats, and get rescued. Much later, in 1977, he returned to Dieppe and discovered that his bombs, while hitting their target, had produced only two dents in the three inches of steel protecting the German gun position.

In any treatment of wartime Malta, the name of George “Buzz” Beurling must come up. Beurling shot down 26 aircraft in fourteen combat days over Malta and passed on his knowledge of deflection angle shooting to other pilots. He earned two nicknames, “Buzz” for his love of low-level flying and “Screwball” for his erratic behaviour and defiance of authority. Bashow handles the Beurling story with sensitivity and frankness. He was haunted by the memory of an Italian pilot he had killed over Malta.

Elsewhere, in 1942 two RCAF fighter squadrons were deployed to Alaska to help defend the United States, perhaps the first — and so far only — American ally in modern times to do so while operating from American soil. Squadron Leader K.A. Boomer shot down a Japanese Rufe, a seaplane variant of the Zero, over Kiska, Alaska, then occupied by Japan. Later, Canadian fighter pilots also fight the Japanese in Burma.

In 1943, Canada solved the “Sergeant Pilot problem” by the simple solution of promoting them to officers. Excluded from the officers’ mess, Sergeant Pilots were not allowed to lead in the air either, which led to problems and resentment within the squadrons. Bashow examines this example of British class-consciousness along with lingering British attitudes towards “colonials.”

In 1944, the Rhubarb (low level) missions over Northwest Europe gave way to ground support in the Normandy beachhead. Here Bashow provides many quotations from Gord Ockenden, a twenty year-old pilot with 443 Squadron. Much later, as a retired major-general settled in Kelowna, Ockenden helped found the Okanagan Military Museum Society.

After the Victory in Europe Day in 1945, All the Fine Young Eagles moves back to Asia. The narrative ends with an account of Canada’s only fighter pilot Victoria Cross, won by Lieutenant Robert Hampton Gray from Nelson, who led his flight of Corsairs in an attack on a Japanese destroyer in Onagawa Bay, Japan.

On August 9, 1945, Gray sank the destroyer but at the cost of his life, only six days before the end of the war.

In the Epilogue, Bashow sketches out the lives of some of the pilots after the war. He includes the surprising appearance of Adolf Galland, the General of the Luftwaffe Fighter Arm, who became a friend and regular attendee at Canadian fighter pilot association events. This shows that the courage of the Canadian fighter pilots was matched by their capacity to forgive and forge new bonds of friendship even with old enemies.

I was gripped and fascinated by this masterful account of Canadian fighter pilots in the Second World War and left with deep admiration for these accurately termed fine young eagles. The book was first released by Stoddart in 1997. 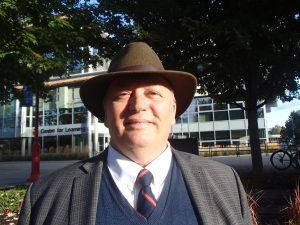 Howard Hisdal is a college professor, chair of the History Department at Okanagan College in Kelowna, and brother of a Canadian fighter pilot. He has 25 years of military service in the Canadian army in both the infantry and armoured corps, retiring in 2014 from the British Columbia Dragoons reserve regiment (Kelowna) as a captain. He holds a Canadian Forces Decoration (CD). As part of the forward air controller course in the army, he got to ride in the back seat of a CF5 jet fighter as it made eight simulated ground air attack runs — and gradually lost his grip on his air sickness bag. Howard graduated from Royal Military College in 1976 with a B.A. in history. As well, he got his M.A. in 1994 at Carleton University under the supervision of Dr. Norman Hillmer, one of the writers of the RCAF official history. Howard Hisdal is currently the vice-president of the Okanagan Military Museum Society.